Flutter Vs Xamarin Vs React Native-Which one to Choose?

Developing a new business app is definitely a great move that can help in taking a company to new heights of success. However, the task becomes a little tedious among the plethora of platforms for mobile app development to choose from.

The Good & Bad of Mobile App Growth across the Web

Flutter, React Native, and Xamarin ranks among the top three development frameworks for mobile apps across the web.

The Flutter framework is highly popular among front-end developers as a highly popular open-source framework for cross-platform mobile app development. In addition to providing excellent user interfaces, the platform makes code reusability from 50-90 percent. It makes use of Dart to create high-quality applications.

Large device size: It encourages developers to reduce the number of libraries and compact images in order to make necessary adjustments. The average Flutter app is 4.7 MB in size which is quite large compared to a standard 1 MB Android native app.  Native API: As there are many non-native APIs, packages from third parties may be needed.

It is the oldest cross-platform mobile app development system that carries with it a host of pros and cons when it comes to developing mobile apps. The architecture makes up to 96 percent reusability of code. Starting with Xamarin is simple as the framework allows the user to create the UI in two ways.

Delay in updates: As new platform updates take some time to represent in Xamarin software, problems with app performance can arise. The creation of complex applications is time-consuming compared to native apps.

React Native was developed by Facebook in 2015 and is another common mobile app development system across the internet. In addition to allowing developers to write few components using Swift, Objective-C, or Java as & when necessary, the framework makes efficient use of the common high-level programming language JavaScript.

Having native UI controls means an excellent GUI, and hence an app experience with React Native similar to native apps. It even makes total re-usability of 90 percent of code. 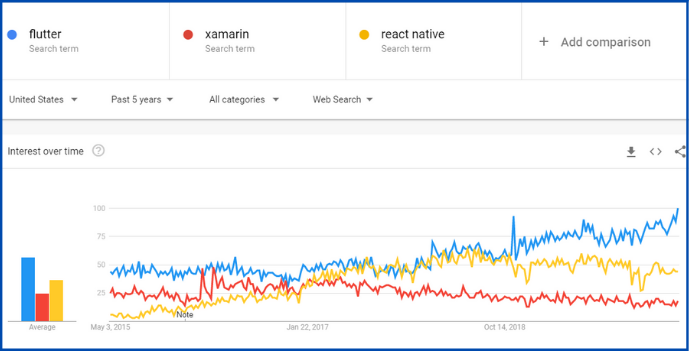 Choose a platform that suits the business software requirements perfectly

All the aforementioned three frameworks come with their fixed set of pros and cons. They have delivered some exceptional apps, as can be seen from popular apps developed using the individual frameworks. While from a cost-effectiveness perspective, React Native and Flutter are good, Xamarin excels in terms of seamless user experience.

Developers and organizations may have their own collection of platform selection criteria.

Whereas businesses should shortlist the platforms from the viewpoint of total ROI and consumer experience, developers can concentrate mostly on ease of coding and building high-end applications in a shorter time frame. Let's then come to the conclusion, which of these three frameworks is best for mobile app development across platforms?

The winner is...  Regardless of the few cons Flutter has, it's really quite a powerful platform that allows you to create beautiful native apps to ensure a high-end output.

It clearly demonstrates how increased interest in Flutter has left behind Xamarin and React Native as a preferred cross-platform mobile device development system. While Flutter emerges as an excellent framework among the three, depending on your specific business needs you can choose the framework. Alternatively, you can also be guided by an existing cross-platform application development company.

You should speak with the organization about your project scope & budget to get a recommendation on the best system to choose from. If you want the best timely delivered product you can choose to recruit Flutter developers, Xamarin developers, or EPixelSoft ' React to Native developers. We are a credible cross-platform application development company and that's not boasting! Our customer retention rate of 99 percent is proof of our great performance.