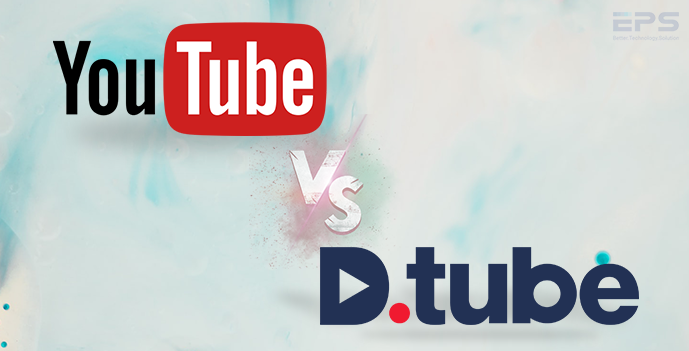 The most unique trait of innovation in technology is that anything trendy today can't remain in vogue tomorrow. Point is, emerging technologies are often the replacement of their counterparts that have either gone outdated or have lost their charms to impassive users.

And DTube is one such innovation in streaming technology, a potential alternative to YouTube.

No doubt, video-streaming on YouTube is quite a sublime experience for viewers. Even in an era of digitally dominated streaming sites like Netflix and Amazon Prime, YouTube holds its sway over millions of fans who use the platform to upload and monetize their videos, promote their business, and watch videos for infotainment.

One of the reasons why DTube is different from YouTube is that it is a decentralized video network compared to YouTube that relies heavily on centrally collected videos which the video sites like YouTube send to devices on demand.

Here is the breakdown of what DTube stands for, its working mechanism, but before we discuss them, let's talk about how online video sites typically work.

How do Video Streaming Platforms work?

Most streaming video platforms including YouTube work based on centralized system.

The video content you upload on YouTube is technically uploaded on to its servers. The uploaded video is searchable through the search function of YouTube, which then allows your video content to stream on devices in whatever format it thinks is best.

The thing to understand here is any centralized video network like YouTube offers the same content to all the devices. This is one of the issues found in the centralized services.

The one glaring issue with YouTube is that users don't have any control over the fate of their videos that they upload on the site.

Since the videos are technically saved on to YouTube's servers, as a user or uploader, you can't control if the video is removed from the site due to copyright strike or any issue that YouTube finds is in violation of its regulations.

Basically, it is the prerogative of the site as to what should be allowed on its platform. As a user, you don't have such privileges.

Besides, if you want to monetize your YouTube videos through advertising, you are not entitled to decide what is fair to monetize and what isn't. As a content creator, you may also spot some discrepancies that YouTube maintain, like deleting some YouTube channels overnight.

Therefore, we can say a centralized video site like YouTube could be a bad idea to choose.

Then why are people using YouTube, if this is so bad?

Well, not all the people. Some of them have opted for DTube.

DTube or Decentralized tube is a video platform similar to YouTube developed in the form of an application on top of Steemit - a social media platform based on blockchain.

Being a decentralized video service platform means DTube rules out unfortunate deletion of the data of the content creators. It doesn't allow censoring of video content by any third-party unrelated to the DTube community. It gives monetary reward to users for creating and uploading video content.

As a user, you don't have to depend on adverts to make money from your DTube videos, as the money accrues through cryptocurrency. Videos get ranked based on direct user feedback than by any hidden algorithm.

1. It is a decentralized platform

It means DTube doesn't function under any third-party governing authority as it has no central servers. The content you upload is stored on a blockchain. The thing about blockchain is that it is protected by immutable cryptographic signature known as a hash. It simply means no hacker can penetrate to blockchain system. And therefore, user's data is safe.

The benefits of blockchain-backed DTube are-

One of the best features of DTube is that this video site doesn't have ads. Therefore, users can take pleasure of pure viewing experience without being disrupted with commercial ads/messages.

Since the platform operates based on DTube Coin ($DTC) that's a digital currency, it, therefore, eliminates traditional ads. Your upvotes or downvotes determine the worth of a video.

Videos gaining the rounds receive $DTC and it is paid into the creator's wallet.

The dreadful thing about uploading videos on YouTube is you have no idea when your videos can be removed or hacked. DTube, on other hand, allows you enjoy a full-fledged security of your video properties on its platform.

Since it is operated without any central server, it means users' videos can't be hacked. Whether you post your videos with your identity revealed to public views or under pseudonyms, the fact is there is no chance that your videos will be deleted, hacked or leaked.

The thing about YouTube is that it values your videos on its platform based on the view counts. And accordingly it evaluates the monetary value of your videos. On the other hand, a video uploaded on DTube doesn't have view counts, but a detail of how much has been generated for its uploader.

YouTube does a metadata analysis to recommend videos to its broader audience base at any given time. This means the platform doesn't have any idea who or what will watch the recommended videos.

On the other hand, DTube videos are recommended based on upvotes and user views.

Other benefits of DTube -

The main thing about technological innovation is that new things emerge which replace or outshine their counterparts. Between YouTube and DTube, we see a tug of war which video site outshine its counterpart.

While YouTube is surely the world's second largest search engine, DTube is an emerging video streaming platform with potentiality to substitute YouTube for content creators who like iron-clad security, safety of their data and community support, etc.

Do you agree that DTube can replace YouTube? Or is it an uphill battle for the video site to be on top?