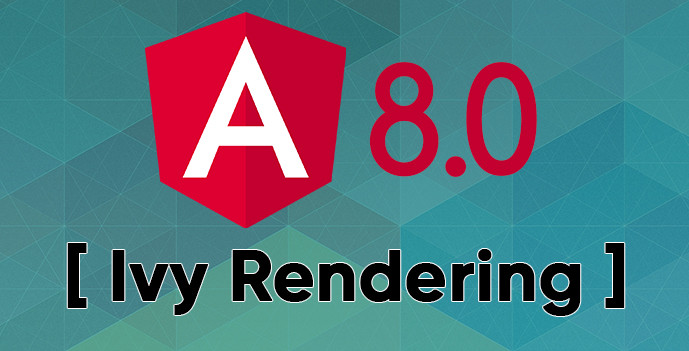 Angular 8.0 is the first version that offers an official Ivy change. Right now, there are no real gains to do it, but you can try to see if there is something in your application that is not interrupted. Because Ivy might be the default at some point in v9. The Angular team, therefore, expects the community to anticipate the change and comment and detect all the remains.

We all know that only a few days ago, Google released its new version of Angular, that is, 8.0. The developers and the Angular community have been eagerly awaiting the release of this update for a long time since Google announced at the launch of Angular 7, Angular 8 will be available with the IVY engine features. The overall expectations are therefore very high.

Angular 8 is Google's first major release in 2019, focusing primarily on the toolchain and also making it easier for users to create different types of applications along with improvements in performance. Besides this, this major release also contains several new features and changes to previous releases.

This update shows in the final stage that the new version of Angular is much simpler, quicker and easier. However, Angular 8 supports TypeScript version 3.4. Thus, with the aid of the new version of TypeScript, coding with the incremental label, the type test for global This and the generic type arguments is much easier with a faster later compilation.

The angular open-source web application framework has developed the latest version, Angular 8.0, consisting of a heavily commented renderer. We'll discuss how there's so much ivy complexity and how Angular 8.0 can increase overall performance.

Since its launch in Google I / O 2018, IVY Opt- IVY has attracted the attention of many people. It is therefore important to understand the essence of what IVY.

IVY was the developers ' favorite topic of discussion. Many still don't understand what IVY is all about. IVY is an effort aimed at creating Angular 8.0's next-generation rendering stream. The Angular developers rewrite the codes for this, which basically converts the Angular model to what is needed in the browser.

This uses the incremental DOM in which each element follows a set of DOM tree instructions. It also changes it whenever a change in the information happens. It will make Angular applications smaller, simpler and faster as the IVY is completed.

You'd get a quicker compilation to recompile only the components that are changing.

To delete the unused code so that the system can only pay attention to the code that you use. This leads to quicker execution time and a smaller set

Therefore Ivy is the basis for the Angular world's future developments. Since many parts of releases of Angular have been updated in the last iterations, the current application will simply work as before after switching to Ivy. This will, however, minimize package size.

Google released a preview version of Ivy in Angular 8. This version's main objective is to collect early comments from the Ivy-related group of Angular Developers. It is therefore advised that Ivy should not be used at this time for the production environment.

Angular 8's most critical and awaited innovation is the IVY rendering engine. Ivy is the latest angular compiler and a new representation channel tool. Ivy's advantage is that it produces substantially small packages; it can also make incremental compilations.

Secondly, it provides compatibility with previous versions since Google has already used more than 600 Angular-developed applications as documents. Furthermore, it is now much easier to read and understand the code created by the Angular compiler.

Provide the quickest compilation so that we can be detected with more errors at the time of creation and stop the user from seeing them. Smaller package size than the current package size compiled.

The CLI will produce separate packages for legacy (ES5) and modern JavaScript packages (ES2015+) from Angular 8 onwards, which will be part of the overall process of creation.

To increase the parallelization and speed of your application, enhanced web worker bundling of web workers is important. This is done by typing the code for the main thread. Angular 8.0 also introduces construction support for web workers to CLI. This is done to address the developers ' common demand

To keep your efforts consistent with the community's needs, Angular 8.0 will incorporate CLI opt-in telemetry. With this, Angular 8.0 will start collecting anonymous data, such as the commands used and compilation speed, but only if you permit it.

Such information will help them understand how Angular 8.0 will be used by developers, so they can enhance it in the future

With Angular 8, it will be easier to upgrade massive applications because they add backward compatibility mode. By allowing gradual loading of parts of the AngularJS framework using the route APIs, it will make it easier for teams to migrate to Angular.

EPixelSoft always committed to keeping an eye on the latest developments and willing to take full advantage of Angular 8.0's upcoming implementation.

We provide web development services that are versatile, cost-effective and tailored to suit all your software development needs. If you want to create a stable, reliable and scalable web solution, then, you can contact our competent team of Angular developers.