Top Cloud Computing Trends to watch out for in 2022 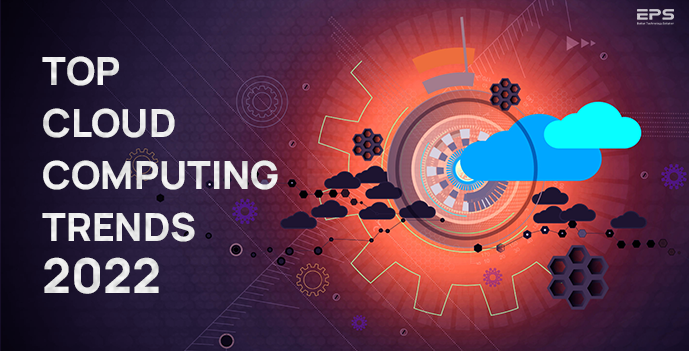 The innovative cloud data center infrastructure, with enterprise-wide cloud migration, is now an unquestionable identity as a backbone of today's and future's digitally-driven world.

A shift from the deployment of cloud tools to more holistic strategies centralized around increasing the abilities of remote and hybridized workforces has authenticated the viability of cloud technology as one of the futuristic trends.

From serving as a key medium to the delivery pipeline of just about every digital platform, including social media and streaming entertainment, and to the connected cars and autonomous Internet Of Things (IoT) infrastructure, the cloud computing infrastructure is outright essential.

With super-fast networks like 5G and Wi-Fi 6E to be implemented broadly in near future, there will be an explosion in the availability of super-fast streaming services from the cloud gaming platforms such as Google Stadia and Amazon Luna. Moreover, we may have in future cloud virtual and augmented reality (VR/AR) to transcend our imagination to the Matrix-level rendition.

These are innovations in the making that prove the power of Cloud, and also its viability from an investment point of over the course of 2022.

The thirst for cloud solutions is ever-growing, with more businesses around the world adopting cloud migration strategies.

As long as businesses worldwide adopt a cloud-first strategy, let's discuss some new and futuristic cloud computing trends for 2022.

A cloud computing execution model or Serverless computing is an innovative architecture for code execution. It eliminates hassles for developers in managing, provisioning, and maintaining servers when deploying code.

Based on the mechanism called functions-as-a-service, serverless computing is now a revered cloud standard among bigwigs of the cloud computing world based on its legit pay-as-you-go model helping brands pay just for the services used. The serverless architecture rules out any major capital investment when it comes to scaling an application invisibly, and helps eliminate the risk of back-end snags.

The serverless computing model has a pivotal role in fostering a unique user experience in the future.

Google CEO Sundar Pichai is all in favor of the viability of cloud computing, based on its role in the deliverance of AI services, calling it more profound than electricity or fire, considering how the architecture will influence society in the future.

The development and evolution of both cloud and AI are deeply interwoven.

Moreover, the role of Cloud datacenters is also invaluable in catering to the working mechanism of Machine Learning platforms that relies on the huge processing power and data bandwidth. The artificial intelligence that is becoming so ubiquitous around us, like in Google search and Instagram filters, actually resides in the Cloud.

Some of the strongest trends in AI known as "creative" algorithms will have a substantial role in Cloud computing. These trends are generative machine learning that will facilitate the creation of anything from art to synthetic data, and language modeling that will help facilitate enhanced accuracy of machines in understanding human languages.

The Use of Kubernetes for Blockchain

Kubernetes (K8s) is defined as an open-source container orchestration platform that streamlines the automation of software deployment, scaling, and management.

The productivity of this platform has become so stronger within the span of five years that it is now functioning as a default method for deploying and managing cloud applications, notably faster progress than any enterprise technology.

Moreover, the technology's latent power is to map computer resources in sync with the requirements of services in the ongoing infrastructure paradigm.

Interestingly, Kubernetes is seen to be used in conjugation with the new infrastructure layer called blockchain or to deploy blockchain networks. Blockchain is an open-source technology of shared, tamper-proof ledger recording transactions among parties.

The use of Kubernetes for blockchain means interoperable services between companies having different architectures.

Moreover, the deployment of blockchain on Kubernetes is quite simplified, aside from the fact that it also affords the feature of great upgradeability. Such deployment is seen as the standard of adoption aiming to solve the issue of complexity and integration into the existing infrastructure of the blockchain.

A distributed information technology (IT) architecture, edge computing facilitates the processing of client data or involves building localized data centers for computation and data storage near the originating source.

Meaning, it rules out a central location positioned at thousands of miles away. Basically, the technology is an efficient alternative to computing and storing information in the cloud infrastructure.

A decentralized computing infrastructure like edge computing allows reducing latency issues and gives more power to application performance. Data processing is done locally, given its proximity to the end user's device. Therefore, the technology benefits organizations to save money.

The Increasing Popularity of Cloud-Gaming

Cloud gaming is a subscription-based emerging technology in which the users can stream a host of unlimited virtual games on their desktop, laptop, or smartphone. Interestingly, it rules out using an expensive console to play the choice of your cloud gaming.

The premise developed around cloud gaming is that a player doesn't have to buy a disc and console and can stream a game that works on remote servers in data centers.

No doubt, cloud gaming leverages cloud technology in the gaming industry to cater to the demand and engagement of countless players for unlimited options of games, thus eliminating the need for having storage space or specialized hardware. It also rules out the possibility of piracy problems.

The cloud-gaming is quite an emerging trend in the cloud computing environment in the future.

Hybrid cloud and multi-cloud both are used interchangeably but they have one major difference.

Hybrid cloud includes private cloud infrastructure and is typically managed as one entity. On the other hand, multi-clouds consist of more than one public cloud service. Both the infrastructures are the need of the time without any compromise between approaches.

For instance, public servers will be used to store data that needs quick and frequent access while private servers can be used to keep more sensitive data with monitored access. In 2022, more organizations around the globe will focus on utilizing the benefits of these models.

Cloud technology has emerged as one of the biggest tech winners, becoming a trendy tech with novelty and standard for flexibility, productivity, and cost-effectiveness. With the increasing importance of cloud-powered services in virtually all business sectors worldwide, we are sure that the technology of varied and dynamic architecture will have its ubiquitous presence in 2022 and beyond.